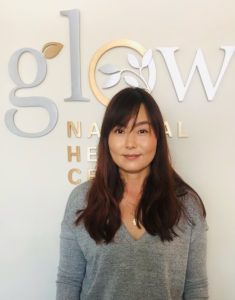 Rachelle is a licensed esthetician in Washington and California. It is with excitement that she has begun as an esthetician, West Seattle Glow. She also has received continued education and training in facial rejuvenation acupuncture. She has been practicing for 10 years and offers skin care services as well as waxing. In addition, She is NCCAOM nationally board certified and a licensed acupuncturist in the state of California.

Rachelle’s interest in Chinese medicine started as a young girl in Honolulu, Hawaii. She can still remember the herbal scents which filled her home as she watched her grandma prepare food and herbal remedies for the family. As she got older, she began to understand that her grandma’s knowledge was rooted in the ancient tradition of Chinese medicine. Time passed and her journey steered her in quite the opposite direction.

She began a career in esthetics which focused on treating the skin and caring for the outer body. After more than a decade of specializing in skin care, Rachelle’s continued interest in Chinese medicine led her to pursue a master’s degree in Chinese medicine. She received her Masters degree from the Academy of Chinese Culture and Health Sciences in Oakland, California.

Knowledge of the inner and outer world to restore balance to the bodying informs her approach. Educating patients in creating harmony through the integration of the emotional, mental and physical aspects of the body is key. She has a passion for helping patients achieve their goals through lifestyle practices based on Chinese medicine and topical skin care science.

Rachelle also holds a Bachelors degree in Studio Art Design from the University of California at Santa Barbara. She currently resides in Seattle with her partner. She enjoys food and experimenting with different recipes and taking care of their cuddly English bulldog named Otis.