High-Tech Tools Show How Acupuncture Works in Treating Arthritis, Back Pain, Other Ills

Acupuncture has long baffled medical experts and no wonder: It holds that an invisible life force called qi (pronounced chee) travels up and down the body in 14 meridians. Illness and pain are due to blockages and imbalances in qi. Inserting thin needles into the body at precise points can unblock the meridians, practitioners believe, and treat everything from arthritis and asthma to anxiety, acne and infertility.
WSJ’s health columnist Melinda Beck tests out acupuncture as an alternative means to reduce her neck and back pain.

While scientists say further research is essential, some studies have provided evidence of acupuncture’s effects.

As fanciful as that seems, acupuncture does have real effects on the human body, which scientists are documenting using high-tech tools. Neuroimaging studies show that it seems to calm areas of the brain that register pain and activate those involved in rest and recuperation. Doppler ultrasound shows that acupuncture increases blood flow in treated areas. Thermal imaging shows that it can make inflammation subside.
Scientists are also finding parallels between the ancient concepts and modern anatomy. Many of the 365 acupuncture points correspond to nerve bundles or muscle trigger points. Several meridians track major arteries and nerves. “If people have a heart attack, the pain will radiate up across the chest and down the left arm. That’s where the heart meridian goes,” says Peter Dorsher, a specialist in pain management and rehabilitation at the Mayo Clinic in Jacksonville, Fla. “Gallbladder pain will radiate to the right upper shoulder, just where the gallbladder meridian goes.”
Many medical experts remain deeply skeptical about acupuncture, of course, and studies of its effectiveness have been mixed. “Something measurable is happening when you stick a needle into a patient—that doesn’t impress me at all,” says Edzard Ernst, a professor of complementary medicine at the University of Exeter in England and co-author of the book, “Trick or Treatment.” Acupuncture “clearly has a very strong placebo effect. Whether it does anything else, the jury is still out.”
Even so, the use of acupuncture continues to spread—often alongside conventional medicine. U.S. Navy, Air Force and Army doctors are using acupuncture to treat musculoskeletal problems, pain and stress in stateside hospitals and combat zones in Iraq and Afghanistan. Delegations from Acupuncturists Without Borders are holding communal ear-needling sessions to reduce stress among earthquake victims in Haiti. Major medical centers—from M.D. Anderson in Houston to Memorial Sloan-Kettering in New York—use acupuncture to counteract the side effects of chemotherapy.
In a 2007 survey, 3.2 million Americans had undergone acupuncture in the past year—up from 2.1 million in 2001, according to the government’s National Center for Complementary and Alternative Medicine.
The most common uses are for chronic pain conditions like arthritis, lower back pain and headaches, as well as fatigue, anxiety and digestive problems, often when conventional medicine fails. At about $50 per session, it’s relatively inexpensive and covered by some insurers.It is also generally safe. About 10% of patients experience some bleeding at the needle sites, although in very rare cases, fatalities have occurred due to infections or injury to vital organs, mostly due to inexperienced practitioners.
Most states require that acupuncturists be licensed, and the Food and Drug Administration requires that needles be new and sterile.
Diagnoses are complicated. An acupuncturist will examine a patient’s tongue and take three different pulses on each wrist, as well as asking questions about digestion, sleep and other habits, before determining which meridians may be blocked and where to place the needles. The 14 meridians are thought to be based on the rivers of China, and the 365 points may represent the days of the year. “Invaders” such as wind, cold, heat, dampness, dryness factor into illness, so can five phases known as fire, earth, metal, water and wood. 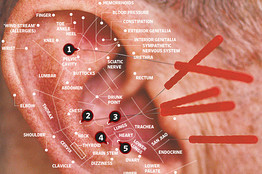 “It’s not like there’s a Merck Manual for acupuncture,” says Joseph M. Helms, who has trained some 4,000 physicians in acupuncture at his institute in Berkeley, Calif. “Every case is evaluated on an individual basis, based on the presentation of the patient and the knowledge of the acupuncturist.”
Dr. Helms notes that Western doctors also examine a patient’s tongue for signs of illness. As for qi, he says, while the word doesn’t exist in Western medicine, there are similar concepts. “We’ll say, ‘A 27-year-old female appears moribund; she doesn’t respond to stimuli. Or an 85-year old woman is exhibiting a vacant stare.’ We’re talking about the same energy and vitality, we’re just not making it a unique category that we quantify.”
Studies in the early 1980s found that acupuncture works in part by stimulating the release of endorphins, the body’s natural feel-good chemicals, much like vigorous exercise does. Now, a growing body of research suggests that it may have several mechanisms of action. Those include stimulating blood flow and tissue repair at the needle sites and sending nerve signals to the brain that regulate the perception of pain and reboot the autonomic nervous system, which governs unconscious functions such as heart beat, respiration and digestion, according to Alejandro Elorriaga, director of the medical acupuncture program at McMaster University in Ontario, which teaches a contemporary version to physicians. 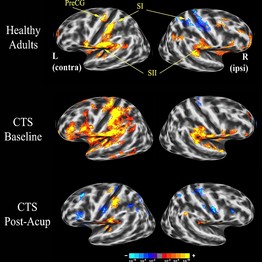 “You can think Western, you can think Eastern. As long as your needle goes to the nerve, you will get some effect,” Dr. Elorriaga says.
What’s more, an odd phenomenon occurs when acupuncture needles are inserted into the body and rotated: Connective tissue wraps around them like spaghetti around a fork, according to ultrasound studies at the University of Vermont. Helene Langevin, research associate professor of neurology, says this action stretches cells in the connective tissue much like massage and yoga do, and may act like acupuncture meridians to send signals throughout the body. “That’s what we’re hoping to study next,” she says.

“ My former spouse had shingles. Doctors told her that the terrible pain would probably last 2 or 3 years. She got acupuncture treatments, plus some Chinese herbs, and the pain was totally gone with 6 weeks.:

Meanwhile, neuroimaging studies at the Martinos Center for Biomedical Imaging at Massachusetts General Hospital in Boston have shown that acupuncture affects a network of systems in the brain, including decreasing activity in the limbic system, the emotional part of the brain, and activating it in the parts of the brain that typically light up when the brain is at rest.
Other studies at the Martinos Center have shown that patients with carpal tunnel syndrome, a painful compression of nerves in the wrist, have heightened activity in parts of the brain that regulate sensation and fear, but after acupuncture, their brain patterns more closely resemble those of healthy subjects. Brain scans of patients with fibromyalgia show that both acupuncture and sham acupuncture (using real needles on random points in the body) cause the release of endorphins. But real acupuncture also increased the number of receptors for pain-reducing neurotransmitters, bringing patients even more relief.
The fact that many patients get some relief and register some brain changes from fake acupuncture has caused controversy in designing clinical trials. Some critics say that proves that what patients think of as benefit from acupuncture is mainly the placebo effect. Acupuncture proponents counter that placebos that too closely mimic the treatment experience may have a real benefit.
“I don’t see any disconnect between how acupuncture works and how a placebo works,” says radiologist Vitaly Napadow at the Martinos center. “The body knows how to heal itself. That’s what a placebo does, too.”
Write to Melinda Beck at HealthJournal@wsj.com

Lindsey Lawson MS EAMP is an Acupuncturist, Chinese Herbalist and Clinic Director at Glow Natural Health in Madison Valley and West Seattle and Seattle Fertility Acupuncture. She is passionate about healthy, happy living and a regular blogger. For an appointment call Glow at 206 568 7545.